The Ultimate Guide to Renting in Austin, Texas In our Ultimate-ultimate Guide to Renting, we take apartment renters through the entire leasing process – everything from how to conduct a search to what questions to ask, to the application process, to the actual move. It’s applicable to pretty much every apartment renter, but this blog…we made this blog especially for renters looking for apartments in Austin, Texas!

Every city is different when it comes to apartments, neighborhoods, and overall culture, so here is everything renters in the 512 (or moving to the 512) need to know about apartments in Austin.

…and hopefully, you get to collect $200, but we digress. Before we hop into everything ‘Austin,’ make sure you’re kicking things off by asking yourself all the right questions. Things such as:

Now that you’re clear on a general who, what, when, where, why, how much, it’s time to navigate the “Music Capital of the World’s” apartment market like a pro (even though we’re technically here to do that for you).

Austin is different from other Texas metros in the sense that it doesn’t have any major highway loops. For Austin newbies, no, Loop 1 (Mopac) is not actually a loop – it just runs from north to southwest Austin. Essentially, what we’re getting at is that access to Austin frequently runs adjacent instead of being sectioned off according to highway access.

This is wonderful for renters because you don’t have to live 30 minutes outside the city in order to get a great deal on an apartment! However, when you’re choosing an Austin neighborhood that fits your vibe, knowing your city ZIP codes will come in handy. Most Austinites use ZIP codes and cardinal street locations (north, south, east, west) to refer to certain landmarks and neighborhoods rather than actual names. This is especially true the closer to Central Austin someone might be referring to.

The city is essentially separated into North, Northwest, Northeast, North Central, South, Southwest, Southeast, South Central, just Central, Downtown, West, far West, and East – plus a few others. So, instead of saying “South Austin,” one might just say “78704,” or “the-04.” Or, instead of saying “Downtown,” someone might refer to a specific section of downtown by saying “78701,” or just “the-01.” We even label our Austin apartment deals on Instagram by ZIPs!

If you’re new to the city, that might feel like a lot, but believe us – you’ll get the hang of it; it’s the Austin way! Neighborhoods vs. walkability vs. renovation expectations

It’s no secret that Austin has some serious charm. Last October, The Greater Austin Chamber of Commerce composed a report that shows on average, 168 new residents move to the area each day! The report states that “the Austin metro area gains about 32,000 people a year from domestic migration, [and] 6,850 from international migration….”

We get it – everyone loves Austin. But, honestly, who wouldn’t? Every single neighborhood has its own sub-culture, which of course comes with its own apartment culture, as well. When it comes to renting an apartment in Austin, you’ve kind of got three tiers of options: an Austin-charm premium with varied unit updates, renovated boutique properties, or brand new everything for more monies.

Classic Austin neighborhoods such as South Congress, Hyde Park, and Old West Austin, have been around from the jump, which is why they host so much of the city’s sought-after vibrance and swag. Since these neighborhoods have been around for a while, apartment properties are naturally a little bit older than in other areas. They’re also extremely walkable to a plethora of local spots and at the epicenter of full ATX-immersion. This is why you’ll pay a bit of a premium for units and amenities that are less updated (think possible window AC units, white/black appliances, and gyms with older equipment).

Austin also features a good little amount of, what we call in the apartment biz, boutique properties. They host a smaller number of units and have undergone moderate renovations, but probably still have things such as an on-site, shared laundry facility, possible window units; and may lack community amenities like pools and gyms. Rent prices at these boutique properties pretty competitive for what you get, and they’re typically pretty scoot-able to local spots. Renovations in these units are pretty standard- quartz countertops, hardwood floors in common areas, ceiling fans, and stainless steel appliances (with the occasional white/black fridge and microwave).

A common misconception about newer apartment builds in any city is that they’re going to be hella expensive, which isn’t always the case. A new build in North Austin won’t boast the same rent prices as one in Downtown will, but that kind of goes without saying. However, you’ll have to do your homework if you’re going to find a good apartment deal on a new-build in areas such as South Lamar, The Eastside, or The Triangle. Even though you’re forgoing units with that distinguished Austin charm so many renters are after, you’re still going to pay a premium for that “all-new, brand new everything” lifestyle. Pro tip: this is one area that using a free, seasoned Austin apartment locator to find your next apartment (that’s us) will be a game-changer.

To get caught up on Austin’s latest and greatest properties, pricing and specials, read our ‘new properties’ blog.

Ready to find your next apartment?

Apartment features and finishes in Austin vary from other major metros in Texas. For example, apartments in Houston host warm, industrial finishes such as brick accent walls, exposed air ducts, or the design integration of metals. Apartments in Dallas offer a variety of loft layouts, use of stained concrete, and large windows.

Austin’s different in the sense that with the city being as eclectic as it is, unique apartment finds or features are a little more scarce, especially as you get closer to Central Austin. You won’t find as many airy loft styles or deep industrial finishes in Austin apartments, but here’s what you can expect to see as you tour renovated and more recently established units:

Professional industries and commuting in Austin

The ‘Music Capital of the World’ is also growing to become the secondary tech capital of the United States – a much cooler Silicon Valley in our humble opinion. Northwest Austin has served as a magnet to big tech players looking to expand their company campuses. In fact, it’s the soon-to-be home to Tesla, Dropbox, Oracle and has the potential to host an additional 15,000 Apple employees after their North-Austin campus is built.

Our biggest point in mentioning this? If you work in the North, live in the North; if you work in the South, live in the south, and so on. One of the best parts about living in Austin, which again, is unlike other major cities in Texas, is that maintaining a solid 15-20 minute commute to almost anywhere is absolutely doable. When you’re looking for an apartment, physically map out all the places you frequent so you can narrow down your search and keep your commute times down. Believe us, Austin traffic is no joke – avoid it at all (rent) costs.

We went ahead and listed out where some of Austin’s largest employers are located just in case anyone reading this feels like they need to reevaluate their living location, or is new to the city.

Budgeting to live in Austin

Let us first acknowledge that for the first time in a very long time, 2020 made Austin a renter’s market. Austin’s not necessarily known for its low cost of living, so when properties were facing a downturn in occupancies at the start of the pandemic, rent prices began to drop. Compared to 2019, the average rent in Austin fell by about 3%, landing it right around $1,390 by the end of 2020.

Whether you’re an Austin-OG or new to the city, renting an apartment will most definitely require some budgeting. On average, we saw our clients lease at about $1,225 for one and two-bedroom units throughout 2020. That’s net effective rent without the added cost of electric/water, internet/cable, pet rent (if you have one), additional parking fees, and other personal recurring expenses.

Looking for the best apartment deals in Austin?

Before you start building a budget for your new Austin apartment, know that an industry-wide general rule of thumb is that rent should be about a third of your monthly income. With that in mind, here’s a list of other expenses, like the few listed above, to also consider:

Something every housing market experiences each year is seasonality, essentially a shift in the number of renters moving at one time throughout a season. Since apartment prices are based on the supply and demand of renters moving (which is why they change daily…literally), rent costs are lower when demand is lower, and higher when the demand is higher. For Austin (and most cities), the cheapest times to move are fall/winter, and the more expensive times to move are spring/summer. Definitely keep that in mind when you’re setting up your move date! 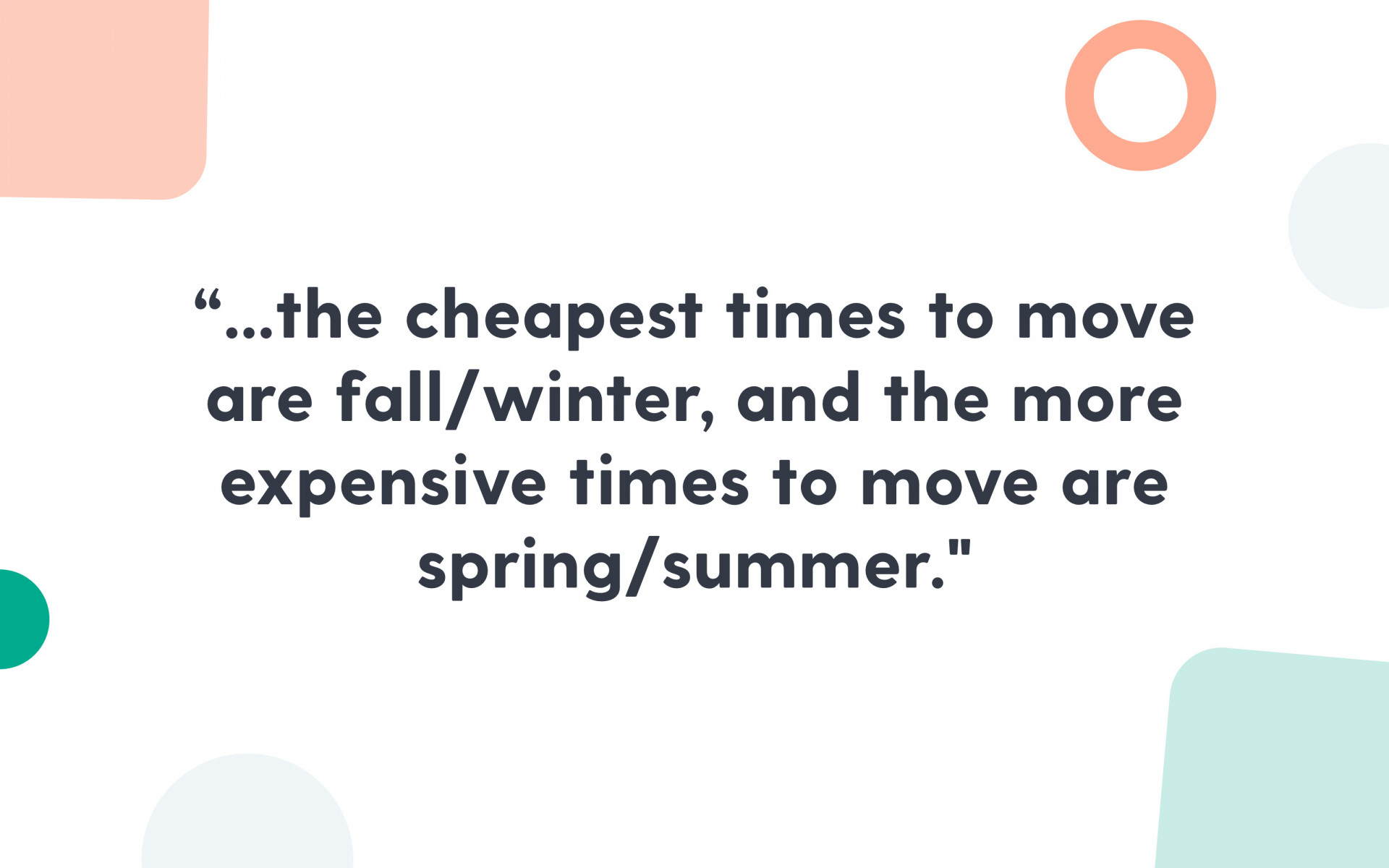 This one’s for all the Austinite newbies

First of all – if you’re new to Austin, use our Smart City neighborhood guides! They’ll help you get the gist of what’s poppin’ where and what rent looks like all around the city.

Second, to get fully immersed in the city, get out and explore. We recommend checking out apartments in areas such as South Central (S. Lamar, S. Congress), Eastside, The Triangle in North Central, and Mueller. Frequent places like Rainey Street, South Congress, West, and East 6th Street (Dirty 6th is its own beast that need not be mentioned), Zilker, Town Lake, and Barton Springs Road.

There you have it, folks – Austin’s best and most comprehensive guide to renting an apartment! Bookmark it, share it, save it to your Safari favorites on your phone – whatever you need to access it in a jiff! Otherwise, skip all these steps and let us find your next Austin apartment. If you’ve never used an apartment locator before, have no fear – apartment properties pay us (chill – it’s legit), so our service is always free to our clients plus, we’re Texas’ number one locating company!

Using this guide should do the trick, but your hours could be much better spent galavanting (respectfully and socially distanced) around the city! Wouldn’t you agree?

Let us help you find your next apartment. For free.