Austin vs. Dallas – The Great Debate 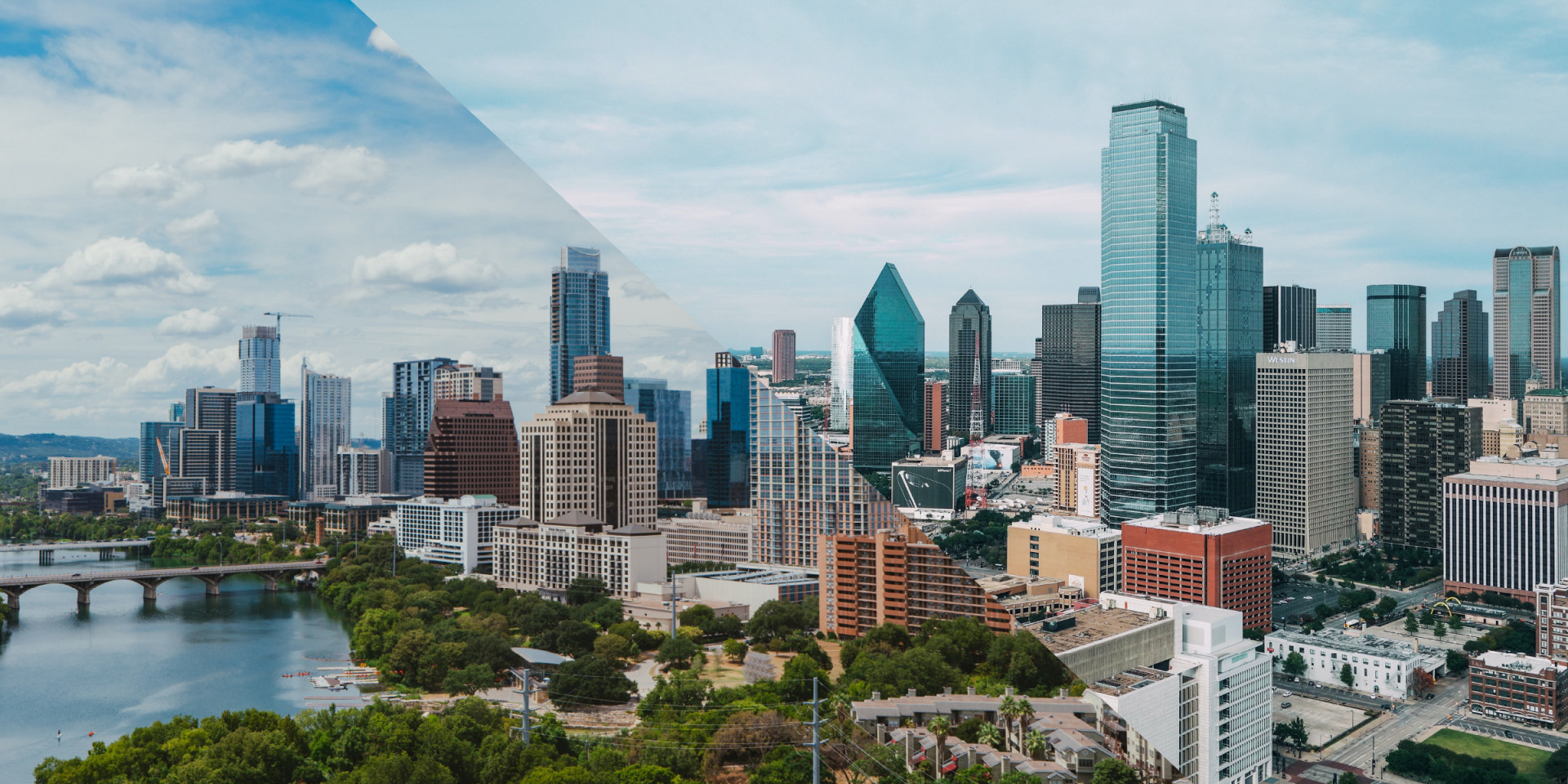 Alright, the time has come to roll up our sleeves and duke it out for the title of the best city in Texas, which basically equates to the best city in America. This probably isn’t the first time you and your friends have had this conversation and it definitely won’t be the last. Here at Smart City, we love a good competition and we just so happen to have apartment locators in both cities, so here it is – Austin vs. Dallas… It’s everywhere. Dallas has a few lakes and they’re fine but… Austin has Lady Bird Lake, Lake Austin, Mount Bonnell, Barton Springs, Shoal Creek, and way, way more. Austin is for Chaco-wearers, adventurers, and people who actually put down their phones and live. And honestly, Austin has way, WAY more places to catch a great sunset.

We love how versatile Austin apartment hunting is because we have so much opportunity to deliver for our clients. One of our clients could be looking for insane high rises with floor to ceiling windows or one of our favorite downtown properties, or they could be looking to save a ton of money and we’ll find them a sweet remodel just 3 Uber minutes away from all of the brand new apartments! Basically, Austin apartment locating is like a box of chocolates because we never know what we’re gonna get.

It certainly isn’t difficult to entertain an out-of-town friend here, with endless things to do that are all unique to Austin. This city is sure to leave an imprint on any visitors that they won’t soon forget because Austin is fabricated from genuine heart and soul, deep in the heart of Texas. It’s gorgeous, multifaceted, and full of dreamers.

Austin is way more laid back. We have the freedom to wear what we want, say what we want, and be whoever we want to be with neither apologies nor explanations.

Austin’s downtown has a more social aspect to it, meaning there’s more to it than just business vibes and a few good restaurants. Our downtown nightlife totally takes the cake in this department because not only is there a social connotation to it, but there is a social option for everyone. If you’re new here, in college, or right out of college, you can find everything you’re looking for on dirty 6th to have that #letsgetweird kind of night. If you’re looking to graduate in the ATX scales of nightlife, head to West 6th. Lastly, if you’re looking for a cool night with craft cocktails, backyard games, and good conversations, look no further than Rainey Street.

We mentioned nature before, but we felt Hamilton Pool deserves its own mention. Just 45 minutes outside of the heart of Austin, this limestone masterpiece looks like something out of a fairy tale or, you know, the modern-day fairy tale: a Jay Alvarrez video. Slip away to a place that makes you feel like a pocket of the Caribbean is somehow tucked away into the Texas hill country.

Somehow, Austin has mastered the remodel way better than Dallas has. Yes, Dallas has a lot of repurposed lofts and tons of brand new construction, but we have hit the nail on the head when it comes to flipping a 1970’s property into something actually really cute and awesome. So much character.

Dallas doesn’t have anything that even compares to the groovy, funky, weird awesomeness of South Central ATX — a true mix of old and new Austin staples. Whether it’s South Congress, South Lamar, or South First–food trucks are a way of life and fur vests hang on the mannequins of every vintage boutique around. This is where Austin harbors all of the ‘weird’ for which we’re so fondly known. “Keep Austin Weird” – may it live on forever!

‘Music Capital of the World’

While we all recover from the ACL weekends, we can rest easy knowing that ATX takes the throne of the best music scene; the Dallas music scene never stood a chance. Whether you’re a musician, a fan, or someone who just loves any occasion that calls for live music, this city will never run out of opportunities for you to revel in what you love. Looking for a place to spend your money? Just kidding. No, but really – Dallasites know how to find a good thing to spend our money on, we are chasers of experiences. For instance, brunch isn’t a meal, it’s an experience. We know how to live well and we aren’t ashamed of it.

Because yeah, it deserves its own bullet point. Brunch is important. You don’t have to wear Lily Pulitzer, a floppy hat, or a bow tie to enjoy brunch here because there is a Dallas brunch for everyone. Everywhere from last-nights-outfit/sunglasses-still-on boozy, to trying to impress your super foodie girlfriend and her parents, just order a carafe and call it a day – because, Dallas.

Dallas has been a major city for a long time, meaning there are warehouses and old repurposed buildings aplenty. With federal and prestigious history, we swoon over some of the lofts we get to find for our clients. Austin has been around for a long time too, but Dallas majorly trumps in the vintage loft game. Don’t get us wrong though, Dallas is also full to the brim with brand new properties that we can’t get enough of!

Downtown Dallas definitely has more of an urban feel to it than downtown Austin does, it’s more compact and you really have to have a certain put-together vibe about you to live downtown here. There’s a downtown hustle that is often imitated but rarely duplicated. Also, the apartment price tag range is much wider in downtown Dallas. You can find a ton of badass high rises in downtown Austin, but if you’re ballin’ on a budget, downtown Austin is definitely a harder area to find options. Dallas has the badass high rises as well as some of those insane lofts we mentioned that typically are more budget-friendly and some additional pockets of spots that won’t break the bank.

We LOVE our neighborhoods here in Dallas. Austin is really into the whole South vs. North thing, but we have things all broken down here into a clump of really popular areas that we have specifically categorized into sectors. Deep Ellum is where you get the best tattoos and can find the most come-as-you-are brunch; Knox/Henderson is the most approachable neighborhood with good eats and great boutique shopping; Uptown is where you go for a wild night out or an active Saturday morning; Bishop Arts is where all of your foodie dreams come true, and so on and so on. We get caught up in which neighborhood we live in, which neighborhood we brunch in and which neighborhood we spend our Saturdays in, and we wouldn’t have it any other way.

The Katy Trail is everything.

We don’t have that much nature, but boy do we exploit the nature we do have. Katy Trail is what we like to call Dallas’ backyard. We actually named it Uptown’s best built-in amenity! Usually, most of us are headed to the unofficial finish line, which is Katy Trail Ice House. Beer and good vibes are great motivators for a little hustle. Also, nothing will give you more puppy-envy than a Saturday afternoon at KTIH, so prepare yourself.

Fun fact: you could live here for years, try a new restaurant every time you go out, and never hit the same one twice. Trying a new restaurant is such a thing here. We don’t have the exact statistics, but we could bargain that 87% of plans in Dallas start with, “Hey have you seen that new place that just opened on Lower Greenville? Let’s go check it out next week”. Dallas loves grabbing dinner and will happily pay $10 for a craft cocktail because being able to rave to your friends about that new place is priceless.

Traffic is a thing here, but I mean really, it isn’t that bad. Traffic here is just a problem during rush hour, which, duh, you’ll find that in any major city. But Austin traffic is just everywhere all of the time and can be truly mind-numbing. Traf-fuck.

Like, HELLLLLO, America’s favorite team resides in Dallas! Sure, Austin has the Longhorns, but what is a Sunday Funday without a home team to get rowdy for? Also, there is no MFFL (Mav’s fan for life) equivalent in Austin. Mark Cuban is a Dallas Mavs mastermind and we’re proud to share the city with him.

So, peeps, you decide – Which city is the best in Texas? If you happen to be relocating to Austin or relocating to Dallas, let us know. Make friends with Texas’ top free apartment locators and get hooked up with a place you really love! If you read through this for the fun of seeing two Texas cities rival one another, read our ‘Austin vs. San Antonio‘ blog.